Few things in Thailand are as instantly iconic as the traditional Thai dress, or chut thai, but what you may not know is that there are many styles to choose from. Each style is used for different occasions and the ensembles can be layered with rich symbolism.

These styles were formalized into eight outfits for women attending official functions by Her Majesty Queen Sirikit, the Queen Mother. Considered an icon of Thai fashion, the Queen Mother is responsible for imbuing the national costume with its distinct Thai identity.

This article explains the historical impetus behind the chut thai, the differences between the various styles, and the revival of Thai textiles.

The origins of the chut thai

The language of style requires no verbal communication; instead, it speaks through textures, colors, and designs. Growing up in the spotlight, Her Majesty Queen Sirikit developed an appreciation of fashion as instantly symbolic of both her identity and her nation’s identity.

Sirikit Kitiyakara, born to Prince Nakkhatra Mangkala Kitiyakara, grew up navigating the elite social circles of Europe while her father served as Thailand’s ambassador to the United Kingdom, Denmark, and France. Her diplomatic bona fides would serve her well when she married His Majesty King Bhumibol Adulyadej the Great, and together, they embarked on a historic, 15-nation tour formally debuting the royal couple.

As Their Majesties were representing the Kingdom throughout the West, the young Queen was quick to realize that Thailand lacked an official ensemble. She tapped designers and researchers not only to furnish her wardrobe for official functions in temperate climates but to create outfits that communicated the Thai identity. They would have to carry elements of traditional Thai garments and be made of Thai textiles including silk. Her Majesty also showed a strong preference for handmade, handwoven dresses.

Pierre Balmain, A French couturier who founded fashion house Balmain, worked with Her Majesty for 22 years, designing a series of stunning dresses from Thai silk for every occasion.

Her Majesty Queen Sirikit led fashion designers and researchers to create the eight styles of Thai dresses referred to as chut thai phra rajaniyom (Thai outfits of royal favor). They drew from historical records of royal dresses to create a suitable ensemble for every occasion, varying in formality and complexity. The chut thai are a celebration of femininity and refinement. 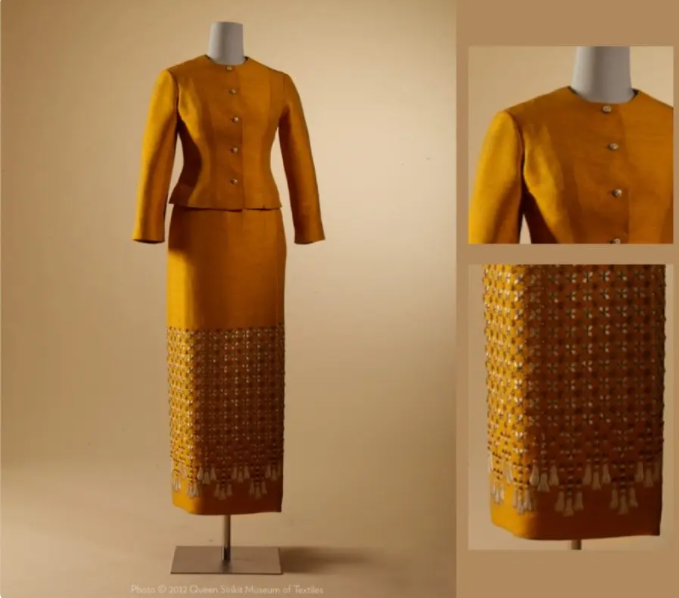 Ruean Ton: The Ruean Ton consists of a collarless blouse and ankle-length sarong or sinh. The sinh has a striped pattern, usually horizontal and towards the bottom of the skirt. The blouse has five buttons down the center and three-quarter sleeves. The blouse may have the same color as the sinh or its patterns or contrast entirely.

Named after the teak houses of Dusit Palace in Bangkok that were built as a more informal reception for the King’s subjects, this simple and comfortable ensemble is considered the casual chut thai. Today, the Ruean Ton is often worn for religious ceremonies & holidays, and going to the temple, and as a uniform in the hospitality industry. 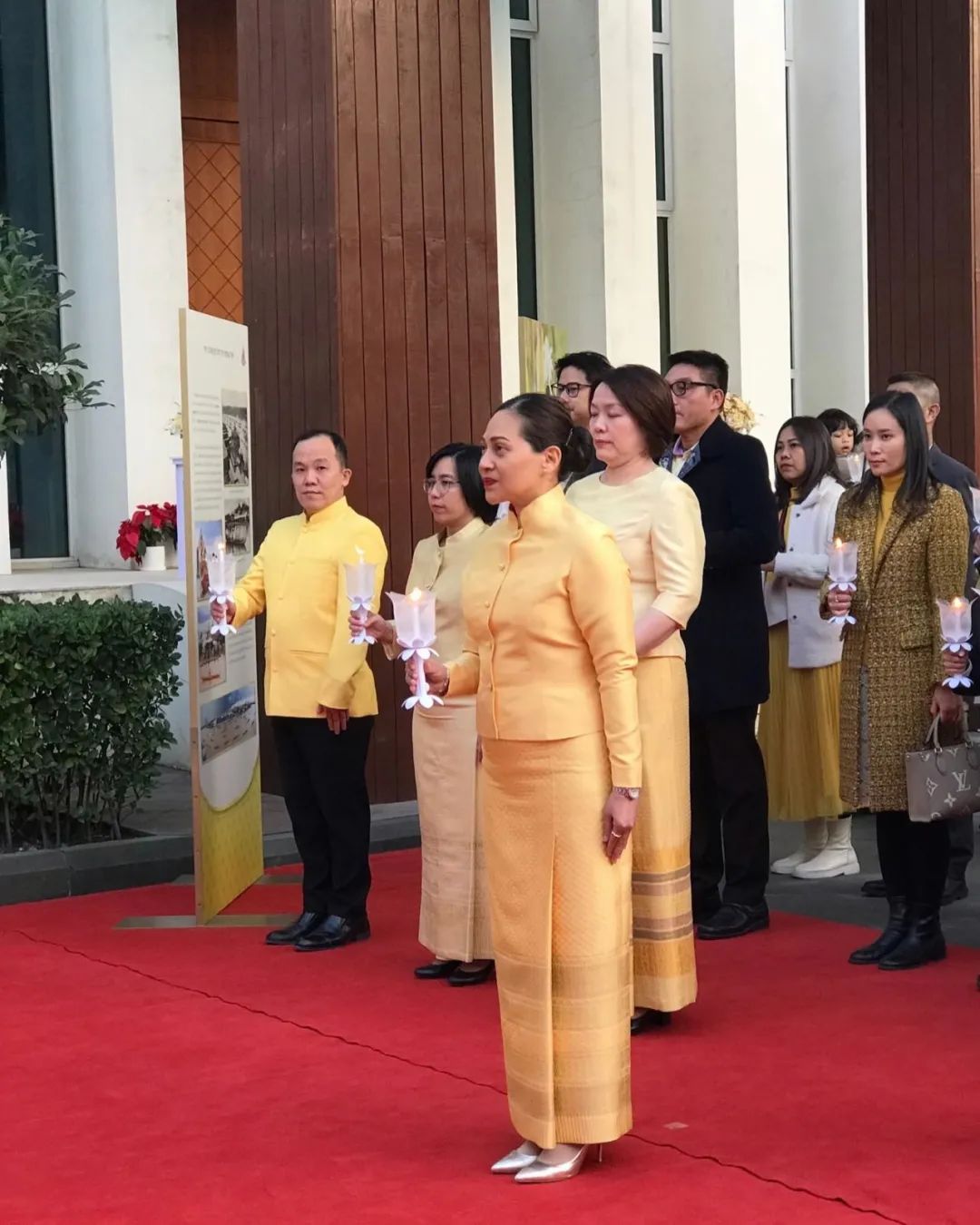 Chitralada: Named after the Chitralada Royal Villa, the Chitralada is more formal than the Ruean Ton. Key differences are that the blouse has a short, standing collar and the entire ensemble may be covered in flower embroidery.

Depending on the fabrics used, this outfit may be worn during daytime ceremonies, royal ceremonies, and official visits with foreign dignitaries that do not require displaying insignia. Black versions of the Chitralada are worn at funerals or during periods of mourning. 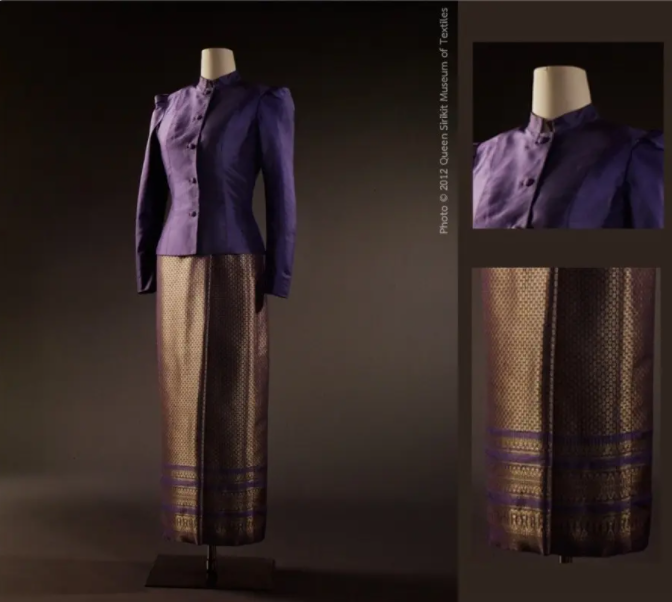 Amarin: Named after the Amarin Winitchai Throne Hall, the Amarin is similar to the Chitralada, but uses more luxurious fabrics and is paired with an extravagant set of jewelry. The silk garments may also incorporate gold thread (silk brocade), especially in the flower embroidery. While there is no belt, the Amarin outfit is usually adorned with insignia depending on the occasion.

This ensemble is suitable for evening functions, receptions, the theatre, royal ceremonies & processions, association gatherings, and other occasions that call for full- or half-dress attire. 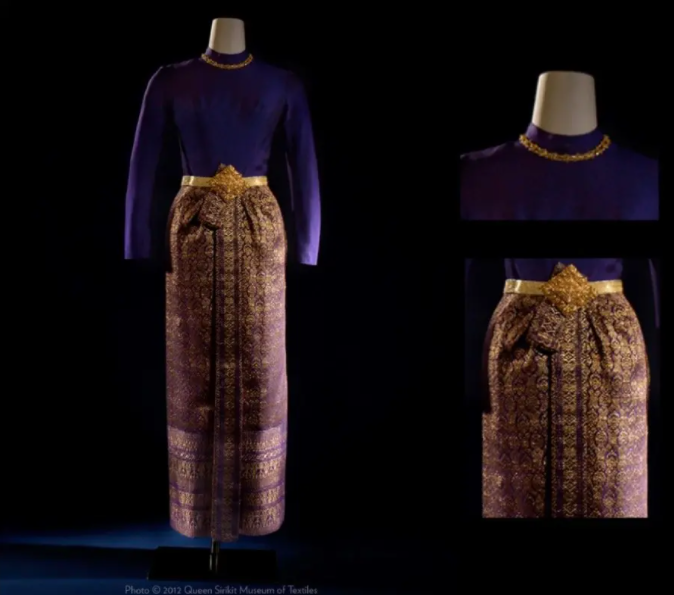 Boromphiman: Named after the Boromphiman Throne Hall, the Boromphiman also uses luxurious fabrics—either Thai silk or silk brocade. Key differences from the Amarin are that the blouse does not have any buttons and can either open at the front or back. Furthermore, the blouse is sewn into the sinh as a single piece, and the sarong is pleated in front in a fashion known as jeeb wai chai pok. Accessories also include an ornamental belt.

Considered formal, the Boromphiman is worn for evening functions and other occasions that call for full- or half-dress attire, such as gala dinners, royal and official receptions, and by royal brides. 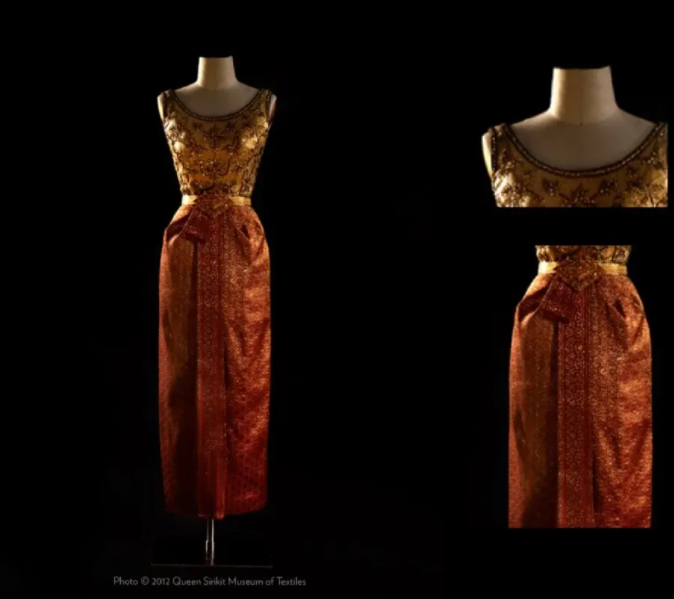 Dusit: Named after Dusit Maha Prasat Throne Hall, the Dusit is markedly different from the other outfits. The blouse is sleeveless and the collar widened into a round neck- and backline. It opens at the back and is adorned with sewn-on jewelry such as pearls, beads, and sequins. It is worn with a gold brocade sinh that is pleated in the front and paired with a belt.

The Dusit is equivalent to a formal Western-style evening gown. 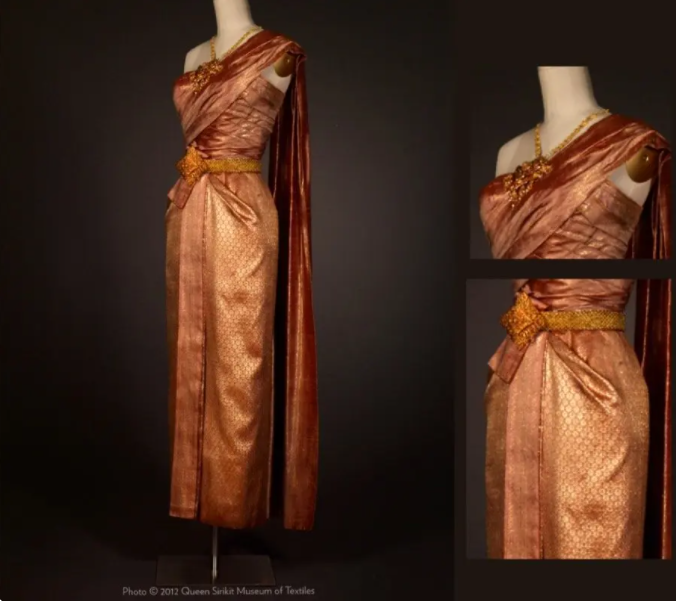 Chakri: Named after the Chakri Maha Prasat Throne Hall, the Chakri is what most people think of when they refer to a traditional Thai dress. Made of gold or silver metal-thread brocade, the outfit consists of bodice wrapped in a single shawl or sabai draped across the chest over the non-dominant shoulder, exposing the other shoulder. The sinh has the signature front pleat, and the ensemble is paired with an ornate belt and necklace.

Considered an evening dress, the Chakri is also worn to royal ceremonies and by brides-to-be for daytime engagement or wedding ceremonies. 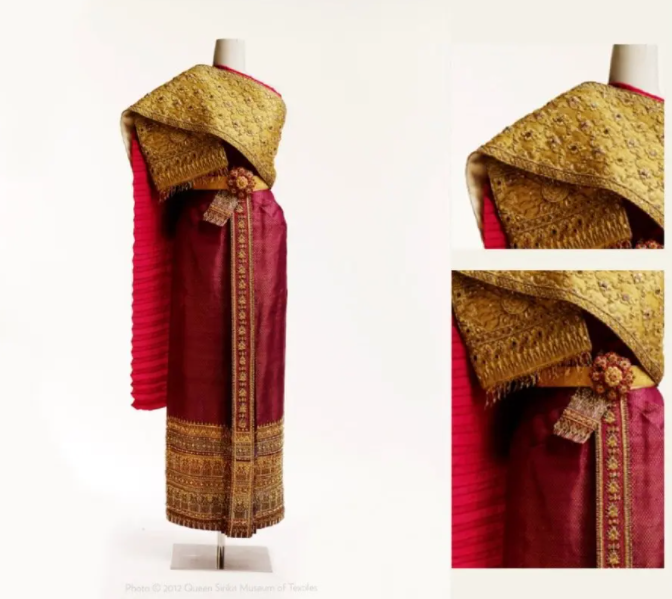 Chakraphat: Named for Chakraphat Phiman Throne Hall, the Chakraphat is similar to the Chakri but considered more elegant. The key difference is that this outfit uses two sabai layered over each other. The outer shawl is often highly ornate, with detailed embroidery. The Chakraphat is often highly accessorized with a necklace, a belt, a tiara, armbands, bracelets, and earrings depending on the occasion.

The Chakraphat may be worn for formal banquets and official dinners. 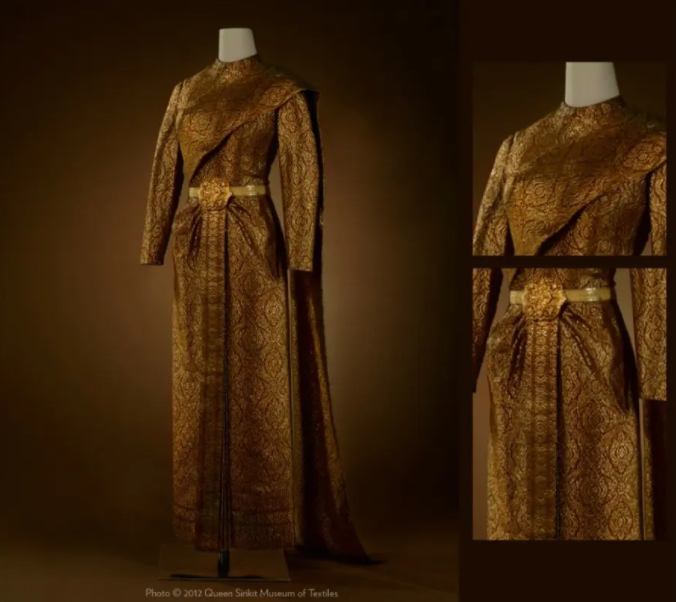 Siwalai: Named for Siwalai Garden in the Grand Palace, the Siwalai consists of a long-sleeve blouse with a short standing collar, a sabai draped across the chest like the Chakraphat, and a sinh with a front pleat that can be a separate piece or sewn into the blouse as one dress similar to the Boromphiman.

The Siwalai is also commonly seen at royal ceremonies or at very formal daytime and evening events.

Her Majesty Queen Sirikit has since been a long supporter of traditional Thai materials, especially Thai silk. Sericulture or silk farming is an extremely difficult trade passed down for generations. After harvesting and soaking the cocoons of the silk moth caterpillar, the silk is spun into threads and painstakingly woven by hand into complicated patterns.

In 1976, the Queen graciously created the SUPPORT Foundation to preserve the history and craftsmanship of Thai textiles, particularly handwoven silk and cotton. The foundation has since been a steady source of income for rural farming communities, especially those prone to bouts of flooding and drought.

Since its inception, SUPPORT has organized annual fashion shows where renowned international designers are invited to incorporate Thai silk into their designs. In this way, Her Majesty ensures the preservation of a beautiful Thai tradition.

Fashion fit for a Queen

Thai dresses were designed as early as the 1960s for royalty, but Her Majesty’s timeless style and foresight has allowed these traditional ensembles to stay relevant as proud statements of the Thai identity and enjoy widespread use and appreciation.

If you want to know more about traditional Thai clothes, visit Queen Sirikit Museum of Textiles or reach out to their Facebook Page. There are several rotating exhibitions showcasing Thai textiles and garments, including the dresses worn by the Queen herself.